Polycystic ovary syndrome (PCOS) is a hormonal disorder that provokes the appearance of multiple benign formations (cysts). This disease occurs with unpleasant symptoms and can cause various complications, one of which is infertility. 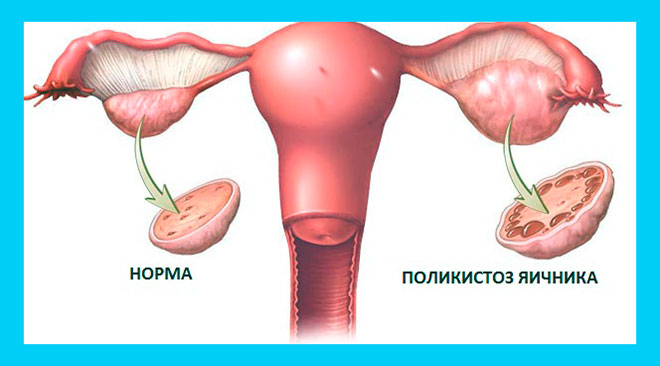 This disease is diagnosed in 4-12% of adult representatives of the female population. Representatives of European and American society of reproductive medicine claim that this disorder is more common, in 15-20% of women of fertile age. For infertility in marriage, this figure reaches 22%.

Currently, there are active debates about the criteria for diagnosing polycystic ovaries and the procedure for in vitro fertilization (IVF). Experts all around the world consider the use of hormonal drugs as an integral stage of treatment, especially when planning IVF for polycystic fibroids (PCOS).

Many modern doctors connect this problem with excess weight. After IVF with polycystic ovaries, overweight women become pregnant twice as often. That is why in the United States, treatment begins only after reducing the weight of patients by 5-7%. This measure increases the chances of successful IVF in PCOS by an average of 15-20%.

Causes of PCOS include:

This disease can also develop in women who live in regions with poor ecology.

In the presence of one or more adverse factors, there is a compaction and an increase in the size of ovarian capsules, under which numerous cystic formations begin to develop.

CRITERIA AND SYMPTOMS OF THIS DISEASE

Polycystic ovaries are characterized by unpleasant symptoms that take the form of:

Because of polycystic ovaries, the probability of developing heart and vascular pathologies increases (regardless of age). This is due to insulin resistance, high risk of diabetes, dyslipidemia, hypertension, hypercoagulation. For this reason, women who have a body mass index of more than 30, as well as a predisposition to diabetes, cardiovascular disorders, need to determine glucose tolerance, insulin levels, lipidogram and other diagnostic procedures.

Method of in vitro fertilization can be prescribed to patients who have no improvement within a year after surgery or medication therapy. Among these women, there are many who have IVF with PCOS.

HOW IS THE SYNDROME TREATED?

Choosing therapeutic strategy, doctors of MC "Medical Plaza" are guided by a woman's reproductive plans. If in the future pregnancy is not planned, treatment will be aimed at regulating menstrual rhythm, eliminating the symptoms of hirsutism, correcting metabolism, and preventing endometrial cancer. Women who are planning to get pregnant are enduring infertility treatment, caused mainly by absent ovulation.

If a patient is not overweight, and is not interested in motherhood, the main treatment is the use of KGK (hormonal contraceptives with a combined composition). These medications include:

Before prescribing these medications, a screening of contraindications to drug therapy is conducted.

In case of various degrees of obesity, the first stage of treatment is weight loss, which helps to correct metabolic status, normalize the rhythm of menstruation and fertility. Such cases involve changes in lifestyle, increased physical activity, and dietary adjustments.

Patients with hyperinsulinemia, glucose intolerance, as well as those with hyperstimulation syndrome, are prescribed "Metformin".

In the presence of anovulatory infertility, the main line of therapy is the induction of ovulation with antiestrogens. This rule applies to patients without intrauterine pathologies, who have normal patency of the fallopian tubes and a healthy partner. Sometimes this method is combined with intrauterine insemination, and requires at least 5 cycles.

In case of insufficient effectiveness of conservative ovulation induction, there is a need for laparoscopy or ovarian cautery. Due to the surgical intervention, it is possible to identify and eliminate concomitant pathologies (in the form of adhesions, small forms of external genital endometriosis).

It is important to keep in mind that ovarian surgery is only necessary to combat infertility in cases of confirmed polycystic disease. Such manipulations do not correct the menstrual cycle and do not contribute to the recovery of patients with hyperandrogenemia. It is also undesirable to perform repeated surgery.

After surgery, pregnancy occurs during 6 months or 1 year. If this type of treatment is still ineffective, it makes sense to turn to in vitro fertilization programs. In this case, it becomes mandatory to prepare for IVF with PCOS, which consists in stimulating ovulation. Often, patients have an excessively active growth of numerous small follicles that are not able to reach the required size and full maturity.

Sometimes laparoscopy or IVF for PCOS is applied too late – too early, at the initial stage of diagnosis, or Vice versa, too late. If in vitro fertilization programs were used too early at a young age, severe forms of ovarian hyperstimulation syndrome may occur. It is also fraught with multiple births and reproductive losses. With late IVF treatment, effectiveness of the procedure is reduced due to prolonged previous therapy or age factor.

INDICATIONS FOR THE USE OF IVF PROGRAMS FOR PCOS

Many women suffering from PCOS are concerned about whether it is possible to do IVF for polycystic ovaries. The procedure is shown to many patients with a similar problem, and is considered one of the most reliable methods of achieving pregnancy.

IVF for polycystic ovaries has its own characteristics – careful preparation, mandatory elimination of endocrine system disorders and improper metabolism. Clinical practice shows that a 3-month preparatory course is often more than enough.

The specificity of IVF programs for PCOS is the probability of OHSS – ovarian hyperstimulation syndrome. This happens if there is an increased sensitivity of the latter to gonadotropin stimulation. In the presence of polycystic ohss occurs twice as often as in a normal state of health.

Ovarian hyperstimulation syndrome is considered as a serious complication, against which there is a bilateral increase in the ovaries, increased blood clotting, accumulation of fluid in the internal cavities, development of kidneys and liver failure. With overly active stimulation, many follicles mature (20 or more). At the same time, an increased volume of estradiol is produced, the consequences of which are impaired permeability of small and medium-sized vessels, blood thickening, and edema. In this regard, ovulation stimulation in IVF should be under constant medical supervision.

Specialists of the “Medical Plaza” center claim that with the normal course of hormonal and metabolic processes, getting rid of excess weight, pregnancy can occur without in vitro fertilization. A long IVF Protocol for PCOS and ovarian hyperstimulation in patients with polycystic disease are optional due to:

These clinical solutions are quite effective. In addition to them, other effective methods are being developed (cryopreservation of oocytes and others). Leading modern technologies are often used in the center during IVF procedures and always provide high performance. Thanks to the improvement of ovulation induction and embryology programs, it is possible to prevent dangerous complications, among which the ovarian hyperstimulation syndrome prevails.

In many cases, in vitro fertilization contributes to the successful fight against PCOS. This is evidenced by the reviews of those who did IVF with polycystic disease. The chances of pregnancy in this case are equal to chances of women who are infertile for other reasons.

If you have a PCOS diagnosis, you should visit a specialist at the “Medical Plaza” clinic. Reproductologists of our center have extensive experience in the diagnosis and treatment of this pathology, so that every woman is guaranteed the maximum chance of successful IVF in polycystic disease.