AN ENDOVASCULAR SURGEON ABOUT WHAT EMBOLISM IS AND HOW IT SAVES THE HEALTH OF WOMEN AND MEN.

Such a disease as uterine myoma is diagnosed in every third woman who has passed the age of 30, and even younger. Every year the disease "gets younger", affecting more and more women of childbearing age. For many years, doctors have preferred to solve the problem radically, sending patients with myoma under a surgical scalpel. But the arsenal of modern medicine has a method that allows you to fight the disease without radical intervention is embolization of the uterine arteries. About the essence of this method, its advantages, features and breadth of indications (it turns out that embolization can solve the problem of male prostate adenoma) - in the column of our expert, endovascular surgeon at the Medical Center “Medical Plaza” (Dnipro) Konstantin Hatsko.

Uterine myoma: what do you need to know about the first symptoms?

Uterine myoma (also called fibroid or leiomyoma) is a benign tumor that occurs in the uterine muscular layer - myometry. The causes of myoma have not been fully investigated, we can even say that they are unknown. Women of childbearing age are exposed to the disease, i.e. every woman before menopause is in the risk group.

The following possible uterine myoma symptoms are highlighted, which should not be ignored by women:

1. Lingering sensations at the bottom of the abdomen and frequent urination calls associated with the pressure of the tumor on the bladder.

2. A tendency to constipation due to bowel compression.

3. Radiculo-like pain in the lower back, pulling sensations in the posterior thigh area (due to compression of nerve plexuses in the pelvis).

4.Appearance of oedema in the lower legs and feet, especially in the evening, the appearance of varicose nodes, which were not there before, due to compression of pelvic veins.

It should also be noted that the uterine myoma is often undiagnosed. A huge number of women with uterine myoma are not even aware of it, and the above complaints are not in any way connected with the possible presence of myoma. Often the disease becomes an "accidental discovery" and is identified during the preventive examination of the patient by a gynecologist. Therefore, regular scheduled examinations by such a specialist should be carried out to detect myoma at the earliest stage of its development. 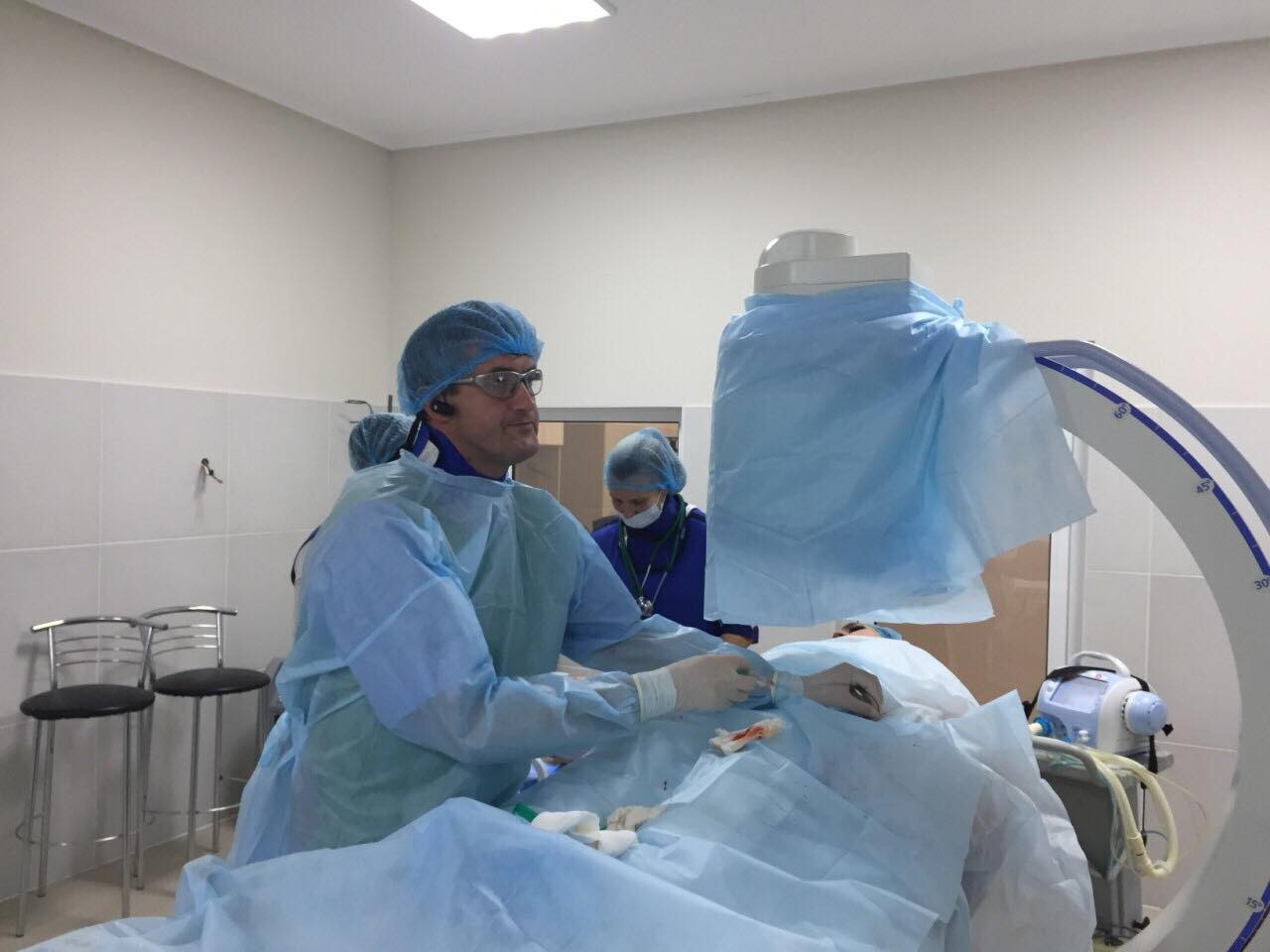 Uterine arterial embolization: no scalpel and with minimal risk

Previously, the problem of myoma in a woman was most often solved by removing the uterus. Patients, regardless of their age or their own fertility plans, went into surgery and thus were deprived of the opportunity to continue having children. Now, thanks to the method of embolization of uterine arteries, the vast majority of patients have a chance to save not only their uterus as a hormonally active organ, which is important for the prevention of atherosclerosis of the arteries of the heart and brain (ie, reduce the risk of heart attack and stroke) in menopause, but also its functional properties - the ability to procreate.

Uterine arterial embolization is a minimally invasive procedure that reduces to almost zero the risks of complications and relapse, preserving the patient's fully functional uterus, the ability to get pregnant and bear a child. This treatment also allows the woman to return to her usual life in the shortest possible time.

The essence of the method is to block the uterine arteries, which leads to the cessation of myomatous nodes and their independent regression. Through a puncture in the artery on the arm is a thin tube - a catheter to the arteries feeding the tumor, and in these arteries is introduced embolizate - special particles of a strictly defined size (usually 400 - 750 microns in diameter). They close the tumour blood flow from the inside and make it impossible for blood to flow to the tumour. Without blood flow into the tumour, acute ischemia begins, lasting up to one month. Then, in the second to sixth month after the operation, there is a stage of chronic ischemia and death of tumour cells. Then, the process of replacing the dead cells with new, scarred cells occurs, and it lasts up to twelve months. These stages flow smoothly into each other, and the total process of invisible to the patient to get rid of the disease takes up to a year.

The advantage of the operation is that it is carried out not under general, but under local anesthesia. The procedure itself lasts from 30 minutes to 1.5 hours, depending on the anatomy of the arteries of the patient.

As with any other surgical intervention in the human body, this operation has the potential to involve certain risks. But since this operation is minimally invasive, that is, it is performed without a scalpel (a puncture in the arterial system is performed with a needle) and does not require general anesthesia, the operational risks are an order of magnitude lower than in open surgery.

The medical conditions for embolization are very broad. In other words, many things can be embolized - stab wounds to the arteries of the femur or buttock, the consequences of injuries, aneurysms, internal bleeding, nodes of any size and localization, with the exception of only one - sub-cerose node on a thin stalk.

Embolization method is also used in the treatment of benign prostate hyperplasia (prostate adenoma). The same method as embolization of the uterine arteries in women also embolizes the arteries that feed the prostate in men. This minimally invasive procedure allows you to get close to most of the arteries that lead to the prostate, and block access to them from the inside. The only difference is that the embolisms introduced into the arteries are smaller in diameter, from 100 to 300 microns.

The surgery to treat prostate adenoma by embolization has a very young history - she is only two years old. This method came to the world from Brazil and is only now gaining momentum. There are no remote results yet, but the immediate results are already encouraging. Already in the first month after the operation in men observed a significant reduction in prostate adenoma in volume, which eliminates the need for a sufficiently traumatic surgery - transurethral resection of the prostate gland.